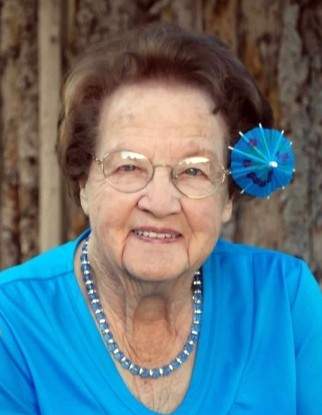 Alice Aletha Jacobson Dewsnup stepped through the veil into the arms of her loving family on Valentine’s Day, February 14th.  Aletha was known as an independent and strong woman who was married to her husband LaMar for 40 years.  She was involved in the farm and other family businesses, and was also known for her talents in embroidery, crocheting, quilting, and baking.  Of her many artistic talents, she was particularly known for her artistry with wedding cakes.  Aletha was a very dedicated daughter-in-law, who developed a close relationship with her mother-in-law, Rose Ella Dewsnup.

Aletha lived for a short period of time in Bountiful, Utah, where she was a phone operator at LDS Hospital.  While there, she was on a first-name basis with the current Prophet of the Church of Jesus Christ of Latter-day Saints, Russell M. Nelson.  Aletha was also an active member of her ward in Deseret, where she served faithfully in many callings.

She was married in the Salt Lake Temple to Thomas LaMar Dewsnup on January 20, 1945.  After his passing in 1986, she worked at more than one job at a time, including Brush Wellman as a guard and the ME Bird Center as the head cook with her sister-in-law, Norma.  She enjoyed these jobs and they were very fulfilling to her.  Aletha had a quick wit and a sparkling sense of humor.

She will be greatly missed.  Aletha, we love you.  Till we meet again.

To order memorial trees or send flowers to the family in memory of Alice Aletha Dewsnup, please visit our flower store.