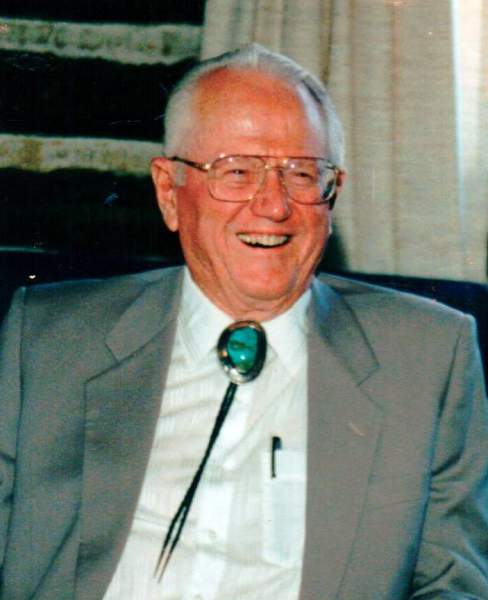 Arnold Ashurst, age 94, passed away Monday, August 31, 2015 in Spanish Fork, UT. Arnold was the second of two sons born in Delano CA to Earl and Othelia Ashurst. When he was a youngster the family moved to the Imperial Valley. His childhood involved a lot of hard work. Both his parents had a very strong work ethic. At age 8 he was often left alone in charge of the family's sheep herd. When the depression hit the family was wiped out financially. They lived in a tent for a time next to a citrus orchard which was sometimes all they had to eat. Part of their financial recovery was due to the money he made from raising hogs as a High School FFA project. They acquired a baler and worked baling hay at night as it was too hot to work during the daytime.

After graduating from Brawley High School in 1939 he went to San Diego and worked as a machinist with Ryan Aircraft. When the war started he enlisted as an Air Cadet and was sent to Fillmore Utah where a small flying school had been set up. In Fillmore he met and married a pretty young local school teacher named Rozilla Stevens. Her best friend was Oleve Bosworth, who later married his best friend, Hal Robison. Many years later Oleve became Arnold's second wife after Rozilla passed away in 1992.

The aviation program was canceled so the pilots were discharged. Back in Brawley there were a lot of old date trees that had not been harvested during the depression. The old dates were used to produce alcohol for torpedo fuel. He made enough money harvesting dates to buy two small houses before being drafted.

He was assigned to the 32nd Infantry Division fighting their way up the Villa Verde trail in Luzon. His company was on a long range patrol behind enemy lines when the war ended. Later the 32nd division was transferred to Japan. They were trucked to Nagasaki where they marched right through ground zero.

He became the Conoco Agent for East Millard County Utah and owned a service station in Holden for a time, then built the "Big M" service station in Meadow. He was successful because of his reputation for integrity, reliability,and honesty. He was a member and officer of the American Legion as well as the Lion's Club and Kiwanis. In spite of the fact that he was not religious, or possibly because of it, he was named Chaplain of the American Legion post. He also served a term on the Fillmore City Council.

He and Rozilla had 9 children and provided us with lots of experiences and helped us in many ways. We were always going off for little trips up in the mountains or over to Yuba Dam, where we often were the only boat on the lake. We traveled to the Grand Canyon, to Yellowstone, and to his parent's place in Brawley CA. In 1983 Matthew was killed in Hurricane Utah. That was a hard blow for him because even though he presented a hard and tough demeanor, he loved his children.

In the 1970's he moved back to California and took over his father's farms. When he got older he leased the farms and moved to Las Vegas. After his wife of almost 50 years died he married Oleve Robison and they had many happy years, moving from Las Vegas to her home in Fillmore. After Oleve died he was with Claire McCoy of Mesa AZ for a while until she passed, then he was married to Madge Warner for a time.

He was pre-deceased by his wives, Rozilla, Oleve, and Claire, his brother William, and his son Matthew. Survived by children John, Jim, Earl, Barbara, Charlie, Ann (Jackson), Susan, and Joe. He has 21 grandchildren and too many great grandchildren to count.

Funeral Service will be held Friday, September 4, 2015 at 11:00 AM at the Olpin Stevens Funeral Home in Fillmore, UT. A viewing will be held prior to the funeral from 10:00 to 10:45 AM. Interment will be at the Fillmore City Cemetery under the care of Olpin Stevens Funeral Home. Online condolences can be offered at www.olpinstevensfuneralhome.com.

To order memorial trees or send flowers to the family in memory of Arnold Ashurst, please visit our flower store.