My beloved husband and Gentle Giant, brother, uncle and friend, Boyd Don Jensen, peacefully slipped away from us on Monday, July 25, 2022, at the Fillmore Community Hospital in Fillmore, Utah, from complications of pancreatic cancer.  He was born in Provo, Utah to Clarence Nels and Thelma Wilson Jensen on October 27, 1944.  He married his soulmate, Carole Lamoreaux, on June 16, 1968, in Elko, Nevada.  At the time of his death, he had been striving to obtain his temple recommend so we could be sealed for time and all eternity, but this relentless disease prevented us from doing so.

Boyd was raised in rural West Provo, Utah, and spent many happy hours exploring and playing with his brothers and friends along the Provo River.   He attended schools in Provo and in Milford, Utah, where he quickly made new friends, and graduated from Milford High School.  Boyd was a hard worker, and always put his heart and soul into every job.  Even as a young boy, he had a paper route that he loved, but his favorite job was selling Spudnut donuts.  His favorite treat to this day is still a fresh donut!  While in Milford, he worked at the Hong Kong Café.  When he was 16 years old, his father passed away; shortly thereafter, the family moved back to Provo.

He went to work for Union Pacific Railroad, and was always a very dedicated employee, and over the next 36 years, held many positions there.  He loved the civil engineering work he did because it took him out into the field and into nature.  He traveled far and wide in his positions, negotiated many contracts, did daily PR work with contractors and people from all walks of life.  He loved  being a bridge and building inspector on the construction of the North Temple Viaduct in Salt Lake City, and the massive 24th Street Viaduct in Ogden, Utah.  He took his responsibilities very seriously, and often visited the work sites in the middle of the night, on weekends, or on holidays, just to be certain that all was as it should be for the work to progress the next day.  Because of that careful and determined oversight, trains were kept rolling through the construction sites, and no contractors were ever injured or equipment lost to any accident or mishap of any kind.  An extremely difficult job was assigned to him--overseeing the building of bridges that crossed railroad tracks in Davis County as the massive I-15 freeway was being extended from Centerville to Farmington.  The Davis County East Canyon winds were often an issue, and Boyd could again be found at the construction site in the middle of the night, walking across the decks of those bridges being constructed high above the freeway traffic, to ensure the decks were fastened down and secure.  Again, the trains were able to move slowly through that area.  Contractors appreciated Boyd’s oversight immensely as he assisted them in maneuvering through a very dangerous construction site surrounded by mainline train traffic and freeway traffic.

Toward the end of his career, he worked in the headquarters office in Omaha, Nebraska, negotiating contracts with state representatives in seventeen Midwestern and Southern states.  That position later took him to the Little Rock, Arkansas office, and finally back to Utah.  He never did care much for the inside of an office building, but always maintained that ability to focus on the details.   After 36 years with Union Pacific, he retired in 1999.  We moved to Kanosh, Utah in mid-2009 to escape the noise, traffic, pollution, and crime of the city.  We grew to love Kanosh and the wonderful people here, the peace and quiet, the beauty of nature, the stars and the sunsets, the blue of the skies, and the wildlife.  Boyd loved animals, especially horses, and being able to offer our pasture to owners of horses and sheep.  Horses followed him around the pasture like a puppy would, and they loved the daily brushing he gave them. He loved dogs and spent many hours training them, and they loved him back. As his health declined in later years, he enjoyed watching the wild birds come into our yard and pasture.  He purchased many field guides of birds and developed a new interest:  wild bird identification and recording their arrivals and departures to and from our property.  CJ loved tending to the birds daily by supplying them with food, water and treats.

One could always find him in the well-kept yard he enjoyed, or puttering in his garage.  He was happy working with the Cub Scouts on their requirements and helping them with service projects or building tool boxes or making talking sticks.  As these youth progressed through school, they would often come to our door for donations for football or baseball fundraisers, and Boyd was consistently generous in supporting them.  He always had a special place in his heart for the underdog, an injured bird, or an abandoned cat or dog.  He and CJ loved traveling the Oregon Coast year after year for twenty years.  He loved being in the mountains or on the desert, and enjoyed the side trips we’d take just to see where a certain road would take us.

He thoroughly enjoyed many family get-togethers, and having visitors come by for a visit and a meal.  He loved his family and extended family immensely, and was always interested in their pursuits and accomplishments, and hearing about their latest escapades.  He was a great storyteller, and kept folks entertained on those visits.  His ability to recall details, names, places, and events was amazing, as was his ability to make new friends.  He loved the people of Kanosh, and appreciated those drop-by visits of so many neighbors and friends, and their many acts of kindness.   He never turned down a chance to go to Cluff’s.  His concern for others was genuine, and he did many kind deeds for others anonymously.  He influenced those he met in a positive way and was truly interested in what they had to say. He was our Gentle Giant, with a loving and caring heart, and our families will miss him sorely.

The family extends heartfelt gratitude to the many family, friends and neighbors for their prayers, kind deeds, food, and offers of help, and to the numerous healthcare providers who attended Boyd throughout his final hospital stay--especially Dr. Wayne O. Brown and Dr. Craig T. Grose.

Funeral services will be on Tuesday, August 2, 2022, at the Kanosh 1st and 2nd Ward Church, 25 South Main Street, with a visitation from 12:30-1:30 p.m., followed by the funeral at 2:00 p.m.  Interment will be in the Kanosh Cemetery nder the care of Olpin Stevens Funeral Home.  Online condolences can be expressed at www.olpinstevensfuneralhome.com.

To plant memorial trees or send flowers to the family in memory of Boyd Jensen, please visit our flower store.

So sorry for your loss Carole. My son Randy passed away this week also so know the sorrow you are going through but the release from pain is best.

Dearest Carole (CJ), We are so very sorry about the passing of your beloved, Boyd. We are praying that you may be attended with peace and comfort as you go forward in the coming days and weeks ahead. We love you, Carole, and came to know Boyd through your eyes as a "gentle giant"! We know he will be greatly missed, and we send along our best wishes, sympathy, and condolences as we mourn together. May the Lord bless you always. Love to you and your family, Jim and Darliene (Lamoreaux)Thompson 💕❤

We were able to visit with Uncle Boyd and Aunt Carol over the years. They were the best hosts and always thoughtful and kind. Uncle Boyd would share stories of working for the railroad. He will be greatly missed but we are glad he is free from the difficulties of the life.

I loved getting to know you two through cub scouts. What a great impact you have made on those young men.Boyd was such a great example of how to treat people. So kind. I’m so sorry to see him go. I love his quiet strength

Boyd will forever be in our hearts. Carol and Boyd were quite the team and they have touched so many lives. He was really a humble gentle giant. We love him and he will be missed. ♥️ 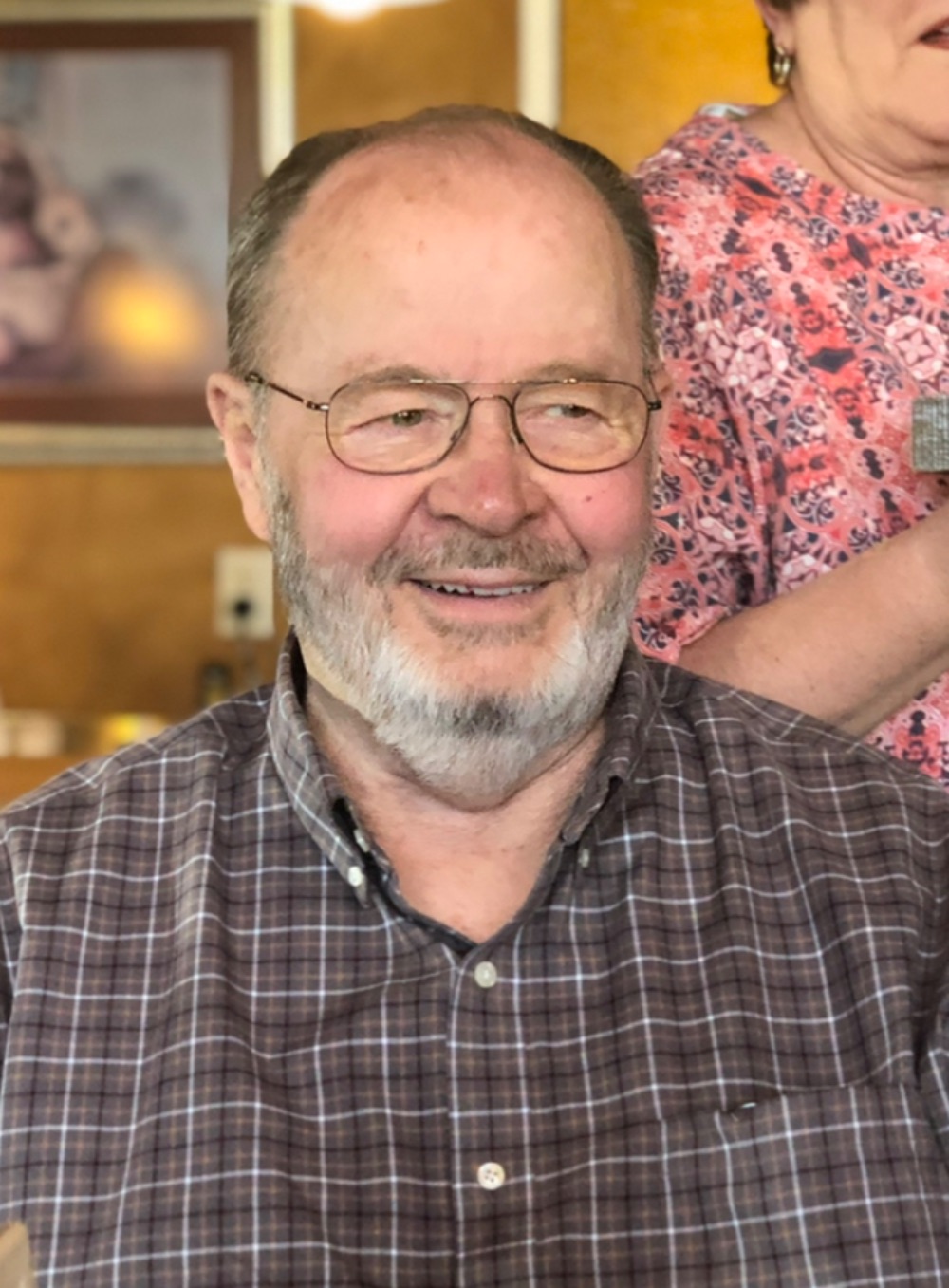 We were so sad to learn of Uncle Boyd's passing. As you said, CJ, he truly was a gentle giant. He'll be missed by all. Much love to you during this difficult time. ❤️