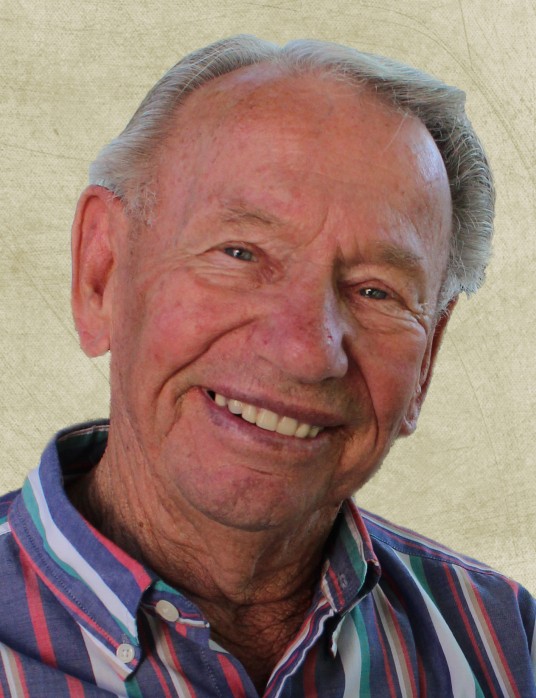 On September 8, 2020, our loving dad, grandpa, great-grandpa, brother, uncle, and friend, peacefully passed away, at the age of 92, in the comfort of his home, surrounded by loved ones. Carlyle “Corky” Arthur Peterson was born December 16, 1927, in Delta, Utah. He was the fourth child of seven boys to John and Katie Peterson. Carlyle often spoke of his childhood fondly, even when talking about being raised during The Great Depression. He frequently taught his posterity lessons about life and how to find what needed to be learned from hardships. He used to tell the story of having to share bath water with all of his brothers while growing up and how gross that water was by the time it got to be his turn or having to share one potato for dinner with six other brothers. He was always teaching those around him that life sometimes was hard, but always look for the good and how to learn from it.

Right after high school, Carlyle began working for the Union Pacific Railroad. Not too long into his career, he married his sweetheart, LuDean Day, on July 22, 1950, in Delta, Utah. Three months later, he was drafted by the Army to serve in the Korean War. During his two years of service, he was stationed in Frankfurt, Germany. He was proud to serve his country, but he deeply missed his bride and wanted to come home to meet his newborn son. Carlyle was honorably discharged in 1952, and upon his return home, he continued working with the railroad for 39 years. During their life together, Carlyle and LuDean had three children: Carl, Bryce, and Sandy. They later solemnized their marriage on September 4, 1965, in the Manti LDS Temple.

Carlyle taught his children the importance of working hard and playing hard. He always worked hard to provide for his family and instilled a strong work ethic into his kids. But he also taught them to know when to have fun, take family vacations, and make memories. Carlyle loved spending time with his family camping, fishing, hunting, playing games, and traveling. Most of their retired life, Carlyle and LuDean traveled to many parts of the world. A highlight of their traveling was enjoying all kinds of cuisines, especially on cruises. Carlyle’s favorite was king crab and lobster.

Throughout his life, Carlyle was an avid athlete. In his youth, he participated in football, basketball, and boxing, but his all-time sports love was baseball. He was a talented pitcher and even pitched with his division’s team during his time in the Army. He continued his love for baseball as he coached both of his boys in their youth and continued to coach from the sidelines for many of his grandchildren. Carlyle was also a true-blue Delta Rabbit. He loved following all the team sports, especially football and “wrastling.” He was also a devoted fan of the Utah Jazz and the BYU Cougars and often scheduled his day around their games.

Carlyle’s love and patriotism for his country was demonstrated through his years of service with the American Legion Post 135. He participated in honoring our country and community with this group for over 20 years in parades, funerals, and flag ceremonies all over the county. Carlyle loved the honor of playing “Taps” after funerals with military rights. One of his favorite things was to present the colors before DHS football games. He missed it deeply the past couple years he had to sit them out. In fact, his love of this was so well known, that three days before his passing, the Delta High Football Team came to his home and presented Carlyle with “a challenge coin.” The team players earn these through their acts of service, and they wanted to commemorate Carlyle’s valiant years of dedication to his community and his country.

Carlyle was a member of The Church of Jesus Christ of Latter Day Saints. He loved the gospel. He held many callings through the years and he served a mission for Deseret Industries from 2002-2003. Countless people often spoke of what an amazing home teacher he was to them. Carlyle was also in charge of organizing the temple van weekly for the senior citizens of Delta. He loved going to the Manti Temple every week, or going to any temple at any time for that matter. Both Carlyle and LuDean lived for their family. The most precious times to them were the times they were able to serve in the temple together. They especially loved the times they were able to go to the temple with their children and grandchildren. They would also stay in St. George during the winter months and go to the temple every day while there.

Carlyle is preceded in death by his wife, LuDean; his parents, John and Katie; his in-laws, John and Cora Day; his son, Carl; his granddaughter, Carla Hennessy; his grandson, KJ Black; his daughter-in-law, Deb Van Epps Peterson; his great-great-granddaughter, Vanessa Grogan; and his five brothers, Leland, Arland, Rodney, Shirley, and Raymond. Carlyle is survived by his favorite daughter, Sandy Black; his son, Bryce Peterson (Maryan); eight grandchildren, and twenty-one great-grandchildren.

Funeral services will be held Thursday, September 17, 2020, at 11 a.m., at the Delta Stake Center, 125 White Sage Ave. Viewings will be held Wednesday, September 16, 2020, from 6-7 p.m., and Thursday at 9:30-10:40 a.m., prior to the service, both at the Delta Stake Center. Burial will follow in the Delta City Cemetery with military rights. We ask that masks and social distancing please be respected during this time.  Online condolences can be offered at www.olpinstevensfuneralhome.com.

To order memorial trees or send flowers to the family in memory of Carlyle Arthur Peterson, please visit our flower store.