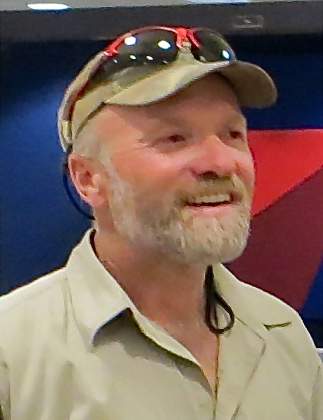 Chet was born on May 30, 1960 in Delta, Utah.  He was the first child of Jerald “A” & Carol H. Finlinson.  He grew up in Denver, Colorado, New Orleans, Louisiana, and Santa Fe, New Mexico where he learned through many different experiences.  While attending Santa Fe High School, he was involved in the marching band and was able to go to Spain with them.  While a teenager, he loved to skateboard, downhill ski and began to gain a great love for rappelling and mountain climbing.  After graduating, he went to work at the Park City Ski Resort.  He then served an LDS mission in London England.  After returning, he met his true love, Joan Lovell.  As she served her mission in Mexico, Chet faithfully waited for her while working and attending Utah Valley Technical College.  They were sealed in the Salt Lake Temple on September 12, 1985.

Chet will be remembered as a hard worker, a good friend to all he met, and as an avid outdoorsman.  He loved being outside, no matter what the weather.  He enjoyed cross country and downhill skiing, snow shoeing, rappelling, mountain climbing, zip line/high line, mountain biking and hiking.  Chet took great pleasure in summiting Fool Creek Peak at least once a week and sometimes multiple times a week.  For the last 20 years he has relished his time on the Millard County Rope Rescue Team.  He had many talents and hobbies that he shared freely. To name a few, calligraphy, anything construction, auto mechanics which he taught his boys lovingly, snakes, harmonica playing and anything guns.  Chet attended the Colorado School of Trades where he earned his Gunsmithing degree.

Chet sincerely loved his family and the gospel of Jesus Christ.  He has faithfully served in The Church of Jesus Christ of Latter-Day Saints in many positions and has had a great influence on others which include as a missionary, great home teacher, ward clerk for 2 Bishoprics, in Young Men and Scouting as well as in Primary where his classes loved his storytelling.

Viewings will be held at the church on Friday 6-8p.m. and Saturday 9-10:45a.m.  Burial will follow in the Oak City Cemetery.

Donations to help with medical & funeral expenses and to help the family can be made at Zion’s Bank Chet Finlinson donation account or the Chet Finlinson Medical Expenses gofundme account  https://www.gofundme.com/2aujsass

To order memorial trees or send flowers to the family in memory of Chet H Finlinson, please visit our flower store.