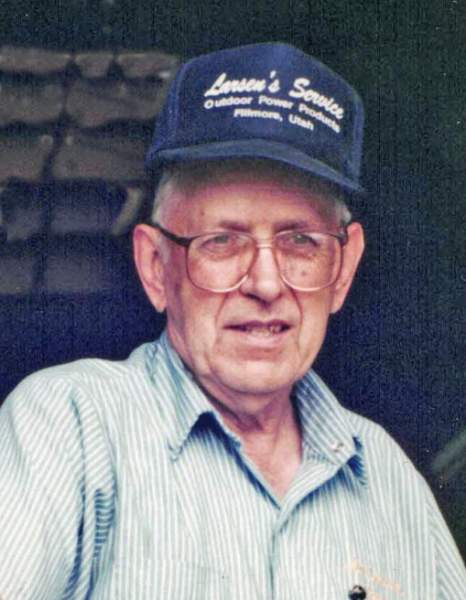 Darwin J. Larsen (Jim) passed away Wednesday, October 7, 2020 at Payson Utah.  He was born March 9, 1931 in Ferron, Utah to Jesse and Anna Behling Larsen. He married Verdeen Roe on September 1, 1953 in Stone, Idaho. Their marriage was later solemnized in the Logan Temple.

Jim was raised in Ferron, Utah. He did very well in school where he graduated from South Emery High School as Valedictorian. He enrolled in college at Price, Utah but soon after joined the army during the Korean War and served in the Signal Corp.  During his army training he traveled to Georgia, New Jersey, and California. While working at the Presidio in San Francisco, California he met and later married Verdeen Roe. They made their home in southern California. Jim worked many jobs after the army including bank teller, bookkeeper, and packing shed foreman. Later he went into business operating auto repair/ gas stations.  In 1970 they moved the family to Ferron, Utah and purchased Ferron Auto Service.  Later they moved to Oregon for a short time and eventually moved to Fillmore, Utah. After obtaining his private pilot license, he joined the Civil Air Patrol. His service to his communities was extensive, serving as Mayor of Ferron, serving on planning commissions, Jeep posse, and as a UAMPS representative.

Graveside services will be held at the Fillmore City Cemetery Saturday, October 10, 2020 at 11:00 AM where he will receive full military honors. A family viewing will be held prior to the graveside from 10:00 to 10:30 AM at Olpin Stevens Funeral Home, Fillmore, Utah. FACE MASKS REQUIRED. Online condolences can be offered at www.olpinstevensfuneralhome.com.

Thanks to all the care given to him by health care professionals in Fillmore and Payson.

To order memorial trees or send flowers to the family in memory of Darwin "Jim" J Larsen, please visit our flower store.