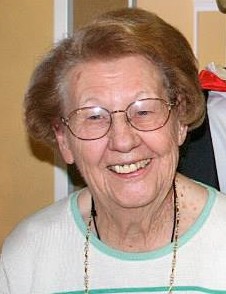 She had been living in Mesa Arizona for the past 4 years with her son, Steven Lewis Ramsey.  Prior to that she had spent 35 years in St. George, Utah.  Her family also lived in Holbrook, AZ; Las Cruces, NM; Danville, Ca; and Los Angeles, Ca.  Evelyn was born and raised in Fillmore, Utah.

She was born to Viola Stringham and Alexander Forti Trimble on March 13, 1922.  After graduating from Millard High School in 1940, she attended LDS Business College in Salt Lake City and worked at “Hill Field” (Hill Air Force Base) during WWII.

After the war she moved to Los Angeles and worked for the Bank of America.  In 1956, through the clever conniving of Betty Ramsey Hopkins, she met Lewis George Ramsey at a church dance class and they were soon married.

After the birth of their son Steven, Evelyn took on the task of full time wife, mother, and home-maker.   Her home was always immaculately clean and organized   (a trait her son did not inherit).

Lewis’ jobs took the family from Los Angeles to Danville, Las Cruces, and Holbrook and they made many life-long friends along the way.

Eventually they retired to St. George, Utah, where they were members of the St. George LDS 5th Ward.
During these years they did lots of traveling to points near and far.    Evelyn served for several years as a typist and other service positions for the St. George Temple.

After Lewis’ death and prior to moving to Mesa with her son, Evelyn spent the last few active years of her life at The Meadows Assisted Living Facility in St. George, again making many wonderful friends.

She is survived by her son Steven Lewis Ramsey, step-daughter Diane Ramsey Donovan, and her last remaining sister Jeanne Beutler.   She has 10 wonderful grandchildren and a plethora of great grandchildren.

There will be a viewing at her son’s Mesa home the evening of Thursday, February 1st.

Funeral services will be held Saturday, February 3, 2018 at 2:00 pm. at the Olpin Stevens Funeral Home at 55 W. 200 S. Fillmore, Utah. A short viewing will be held prior to the funeral from 1:30 to 2:00 PM.  Interment will be at the Fillmore City Cemetery under the care of Olpin Stevens Funeral Home.  Online condolences can be offered at www.olpinstevensfuneralhome.com.

To order memorial trees or send flowers to the family in memory of Evelyn Trimble Ramsey, please visit our flower store.