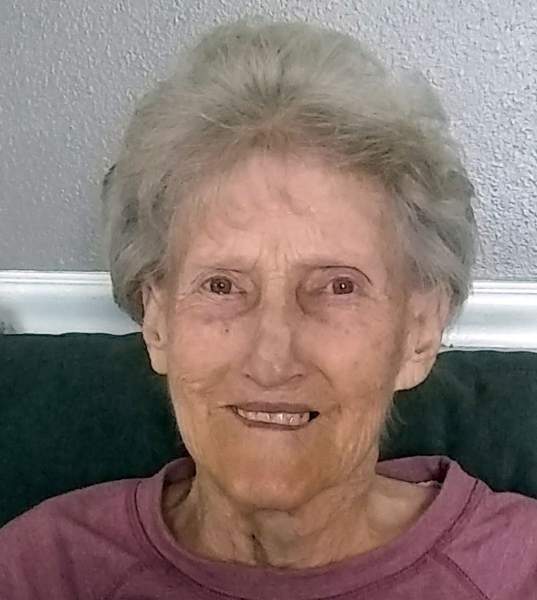 Golda Brinkerhoff Allgood, of Fillmore, Utah was reunited with her eternal sweetheart on July 27, 2021 at the age of 85.
Golda was born in Flowell, Utah to Wendell and Stella Hutchings Brinkerhoff. Golda enjoyed being raised in the close-knit community of Flowell with her brothers and sisters on the family farm. Her father taught her to drive the tractor and plant and harvest the crops. Her father brought home wild animals that they tamed for pets, and she developed a lifelong love of animals. She enjoyed sports and excelled in softball and volleyball. She learned to play the piano and loved music. She graduated from the Ex-cel-cis Beauty School and cut/styled hair for many years. She enjoyed gardening, with well-kept vegetable and flower gardens. She married the love of her life Elbert Del Allgood on June 26, 1965 in the Manti, Utah temple. Golda’s passion was her husband and raising her children in a gospel centered home. When she was promoted to grandma, she was the grandma that joined the grandkids on the floor to play trucks, dolls and Chinese Checkers. She served in many church callings including cub-scouting, ward librarian for 22 years and served two stake missions for The Church of Jesus Christ of Latter-day Saints. After her health deteriorated, Golda was well cared for by her daughter Delsa.
Golda is survived by her sons, Shane (Denise) Allgood of Holden, Utah; Ryan (Gloria) Allgood of West Jordan, Utah; daughters Delsa (Loren) Richins of Utah County; Laurel (Mike) Bruun of San Juan Bautista, California; Sisters: Pearl Robison and Ginger (Larry)Mikesell; Grandchildren: Dylon (Aly), Ashley (Andy), Kolton (Emily), Chase, Mason, Megan, Bryson, Brinlee and Cambree; Great-grandchildren, Aria, Addie, Jarrett, Jackson, Zoë and Baby Allgood.
Golda was preceded in death by her husband Del of 29 years, sons Charles, Douglas, grandson Waylon, her parents, and brothers Delbert, Jim, Fay, Ree, and Earl.
Funeral services will be held Friday, August 6, 2021 at 11:00 a.m. in the Fillmore 4th Ward Chapel (330 E. 500 S. Fillmore). A viewing will be held from 9:30 – 10:30 prior to the service at the chapel. Interment will be in the Fillmore City Cemetery. Online condolences at https://www.olpinstevensfuneralhome.com/.
The family expresses deep appreciation to Bonnie and the staff of iCare Hospice in Payson for their loving care of Mom.

To order memorial trees or send flowers to the family in memory of Golda Allgood, please visit our flower store.
Open