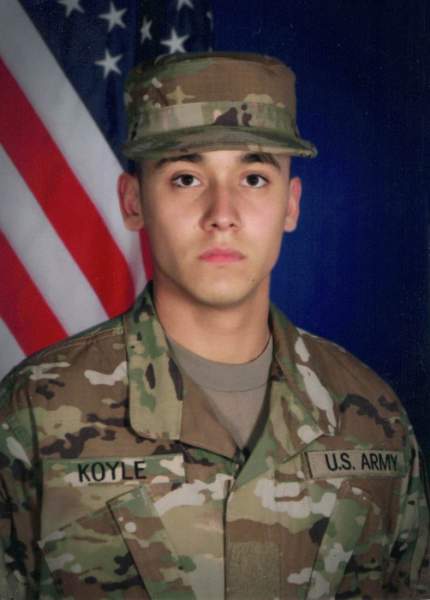 Orson Rey Koyle 25, passed away Monday night November 16, 2020 in Fairbanks, Alaska. Orson was born in San Pablo, California on May 22, 1995 and spent most of his time growing up in central and southern Utah. He was a 2013 graduate of Millard High School where he excelled in Cross Country and Track and also served as FFA president. After high school he attended Lincoln Technical institute in Denver where he completed their welding program. Orson then spent the next couple of years working and welding before deciding to join the military in January of 2017. He spent most of his nearly four years in the military stationed at Fort Wainwright, Alaska as part of Echo Companies 152nd Aviation Regiment and had just been honorably discharged at the time of his passing.

Orson was a carefree and freedom loving person. He was active in life and participated in many things. He especially enjoyed the out of doors and spending time in the hills. Although he was not an avid hunter, he loved his guns and the time he spent shooting them. At age four he learned to ride his bicycle and it was only days before he had to increase the adrenal rush by building ramps to jump off.

While in cub scouts his pinewood derby car won first place on three wheels; and during his participation in 4-H it was learned he had a knack for public speaking winning several contests. He continued this in high school earning the right to attend and then do well at State in extemporaneous speaking. He also used this ability to become a great storyteller usually with parents and siblings laughing so hard that tears flowed openly as they also struggled for air to breathe.

Specialist Koyle is survived by his parents Curtis and Marcia (Flake) Koyle; a brother Samuel and sisters Hannah and Emma Koyle all of Flowell. He is also survived by sisters Moriah (Austin) Putnam of Orem and Lydia (Kyle) Winkley of Richfield. His grandparents Rey and Margret Flake of Snowflake, AZ and Arlene Koyle of Heyburn, ID. He is preceded in death by his grandfather Lavon Koyle.

Funeral Service will be held Monday, November 30, 2020 at 11:00 AM in the Flowell Ward Chapel.  A viewing will be held Sunday, November 29, 2020 for 6:00 to 7:00 PM at the American Legion Hall (80 S Main St, Fillmore, UT).  Interment will be at the Fillmore City Cemetery where he will receive full military funeral honors. To view the live stream of the funeral click the link below in the service information.https://youtu.be/drjXjxCvI68

To order memorial trees or send flowers to the family in memory of Orson Rey Koyle, please visit our flower store.