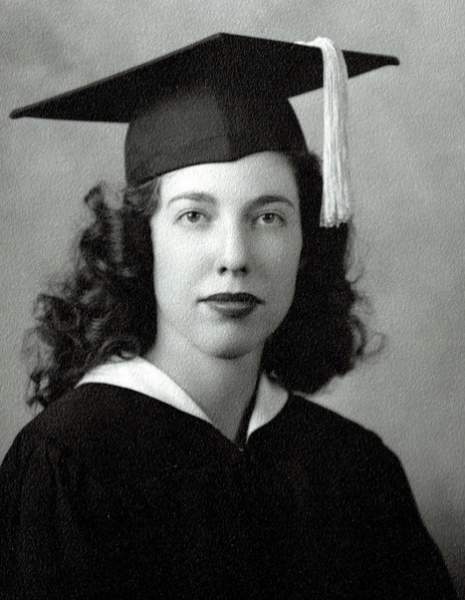 She is also survived by her nephews, Robert Day and David (Dorothy) Day and their families.

June was eight-years-old when she left Fillmore, Utah for Salt Lake City with her family.  She graduated from East High school where she attended with the current president of the L.D.S. Church, Russel M. Nelson.

When June was eighteen, she joined the war effort at the Remington plant inspecting bullets.  She had to be very precise in her work because an imperfect bullet could cause a U.S. soldier's death.  June always blamed her work inspecting bullets for her need to start wearing eye glasses!

After WWII, June served a mission for the L.D.S. Church in Geneva, Switzerland and Nice, France.  She made time to learn the sport of fencing while she was there.  Her father and mother joined her when she was released from her mission, and the three of them traveled to several countries, witnessing the rebuilding efforts in Europe after the war, and enjoying the food and culture.

Upon returning to the states, June obtained her Bachelor's degree at the University of Utah, teaching fencing at the campus fencing club.  She headed to Southern California to teach middle school, where she met and married Grant N. Christopherson.

They spent time in Minnesota and New Orleans, Louisiana before returning to Salt Lake City where June had two babies and completed her Master's degree in 1965 and her Doctorate in Administration of Education in 1967, all while working as a secretary for her department head.  She taught classes at the University of Utah for several years.  One of her memorable students was Jerry Chambers who played basketball for the Utes.

In 1971, after her father passed, June moved her mother and children back to Fillmore.  June wanted fresh air and the friendliness of a small town.  She spent the next five decades as a resident of Fillmore.

In 1981, she was called on a second mission for the L.D.S. church, this time to the Kansas City, Missouri mission.

Upon returning to Fillmore, June volunteered her time working for several Fillmore city mayors and various County Commissions, helping to write proposals and apply for grants to attract businesses to Millard county.

She spearheaded an effort to make sure Fillmore City Sheriff's Deputies were certified by the state, and helped attract businesses to the Fillmore Industrial Park.

June was a part of bringing the Intermountain Power Plant to Delta, Utah, and was instrumental in getting the funding for the East Millard Swimming Pool, and overseeing the project.

June taught the Gospel Doctrine class for thirteen years at the Fillmore 1st Ward.  For ten years, when she was already in her 80's, June was given the church assignment to visit the elderly at the Long-term Care Wing of the Fillmore Community Hospital, even though she was older than many of her charges!

After breaking her hip, June spent 2019 rehabbing and recovering, and lived with her cousin, Marlow Mace and wife Sally in Fillmore.  She then spent her last six months at the Victorian House assisted living facility in Levan, Utah, where she will be remembered fondly for her wit and warm personality.

Sarah June Day was an unconventional, larger-than-life woman who loved Fillmore and its citizens dearly.  She devoted many years of her life to help build Fillmore into what it is today, and she will be sorely missed.

Interment will be at the Fillmore City Cemetery at 11:00 AM on Wednesday, December 9, 2020 under the care of Olpin Stevens Funeral Home.

To order memorial trees or send flowers to the family in memory of Sarah June Day, please visit our flower store.