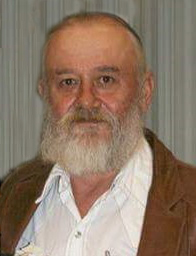 STEWART ALLEN SHIELDS, know and loved by all as, "STU". He passed away peacefully in home, located in Fillmore, UT on Thursday,  September 8, 2016, at the age of 63.

STU was born May 21, 1953 in Delta, UT where he grew up and graduated from Delta High School.

He was known for his value of great work ethics and worked hard since he was just a young boy. As a young man he worked in carpentry which eventually took him to Lake Havasu, AZ, where he met and married the love of his life, KATIE MARIE MCKINNEY.

After moving to Fillmore, Utah, STU worked at Pictsweet Mushroom Farm, now known as Mountain View Mushrooms, where he was the Maintenance Supervisor. During his off hours, he worked side-by-side with his good friend Steve during the fundamental years of R.C.F. Inc. He also kept busy during his retirement and enjoyed working part-time for Holt Waste.

STU loved fishing, hunting, and going on rides up the canyon and into the mountains; leaving both family and friends with countless memories of "Good-Times" spent together!

He was known by his "BIG RED" '76 lifted FORD truck! Recognized by his sock-hat (beanie), pipe, coveralls, his infamous bread and of course in most recent years the “moon boots” which he always left one pant leg untucked! Loved for his dry humor and uncanny wit! Remembered as the "ARIZONA REDNECK"!

STU was, what some most would claim, a self-made Chef! He and Katie spent endless hours experimenting and improving ANY dish with their own "personal touch"! Infact! The extensive time he spent in the HOT sun over his smoker/BBQ proved him a Master of this trade!

He loved his family! Adored his grandkids! Cherished his friends! STU was available "ON THE SPOT" to those most important in his life.

He will be deeply missed by his 7 grandkids- Justina, Ashley, Tallia, Jasmine, Trinity, Patience and Madisyn; as well as, 8 great-grandchildren.

STU will also be fondly remembered by many other loving family members and beloved friends.

To all who assisted and helped, in any way, during this time of great loss... STU's family would like to express their gratitude and extend a very deep heart-felt "THANK YOU"!

Family Services will be private.

Arrangements were handled by Olpin Stevens Funeral Home of Fillmore,  UT. Online condolences & Tributes can be offered at: www.olpinstevensfuneralhome.com.

To order memorial trees or send flowers to the family in memory of Stewart Allen Shields, please visit our flower store.