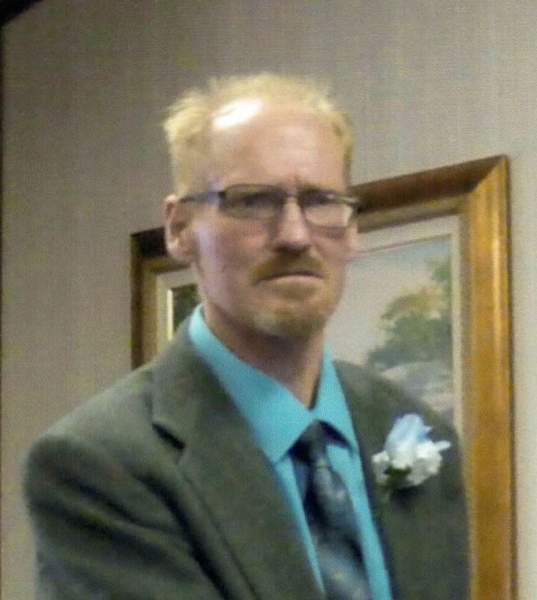 Tim Dunbar of Fillmore, Utah - passed away September 7th 2021 at Cascades at Orchard Park nursing home in Orem, Utah. Tim was born December 5th, 1970 in Murray, Utah to Sharla and Charles Dunbar. He was married for a short time to Mary when he was in his early 20’s after returning from a mission for the LDS church. They had one daughter, Sara Dunbar.

In 2015 Tim found his true love and soul mate in Margarita. He and Margarita They were married May 23, 2015 in Kanosh, Utah, they were sealed in the Cedar City Temple on March 13, 2019. They lived happily in Fillmore, UT until his death in 2021.
Tim spent the first years of his life in Sandy, UT until the family moved to Nyssa, OR where he went to elementary school. From there his family moved to St George, UT where he graduated from high school. He was very artistic and could pretty much paint or draw whatever the occasion called for. Tim loved to work with his hands and was very much like his mother in making and doing crafty projects. One of the crafts he especially loved was making leather items that he would give as gifts from his big heart. He was also a fabulous cook; Tim could go into the kitchen, look around for a minute and come up with a great meal in no time. Tim and Margarita were quite a team in cooking. She brought in the fresh vegetable (and spicy) side of the equation that complimented the rest of the meal. Tim had a great sense of humor and was very friendly. Children especially loved him for his insight of toys and activities they liked. He had the ability to pick just the right toy they would play with for years to come. His nieces and nephews benefited from this gift and all the love and warmth he had to give. Tim had a fantastic smile that was warm and inviting. People felt comfortable and safe with him right away. He was the sweetest heart in our family and will be greatly missed.
Tim arrived in Fillmore, UT to help his ailing grandfather Leo Soderstrom who passed away soon after his arrival. He had finally found the place he was most comfortable and was the perfect fit.
The town and LDS church were most welcoming and gave him the support and love he longed for. A woman in town Laurel Bunker adopted Tim at heart and was a wonderful second mother and support. He was very close to her and her family and even lived with her and her husband for a time. Tim helped take care of her husband Richard as much as he could until he passed away. Both Tim and Laurel worked at the local Burger King in different capacities for a long time. This was a home to Tim and gave him great exposure and friendships he cultivated over the years. Laurel stood in for Tim’s mother when he and Margarita married as his mother Sharla Lee (Soderstrom) Dunbar had passed away by then.
He is survived by his wife - Margarita Dunbar. His brothers and sisters - Michael B. Dunbar of Arcadia, CA, Susan L Wienke of Monrovia, CA, Raymond S Dunbar (deceased) of Provo, UT, Valeda C Garside of Baker City, OR, Ronald B Dunbar of Toquerville, UT. Nieces and nephews - William Dunbar, Brian Dunbar, Patric Dunbar, Rheanna Dunbar, Lyndsey Dunbar, Aubrey Dunbar, Faith Dunbar and daughter Sara Dunbar.

Memorial service will be held Saturday October 16, 2021 at 2:00 PM in the Fillmore 1st and 4th Ward Chapel (290 E 500 S St, Fillmore, UT) . Interment will follow at the Fillmore City Cemetery under the care of Olpin Stevens Funeral Home. Online condolences can be offered at www.olpinstevensfuneralhome.com.

To order memorial trees or send flowers to the family in memory of Timothy Charles Dunbar, please visit our flower store.